The concept of a Docker node and instance are introduced in Payara Server 5.192 as a tech preview. The aim of these is to provide better native integration of Payara Server with Docker.

How Do Docker Nodes and Instances Work?

Docker Nodes, and the instances upon them, were designed to mimic the behaviour of the pre-existing SSH, DCOM, or CONFIG node instances, though as the name suggests are targeted towards creating and using instances housed within Docker containers.

Each Docker node has details pointing it to a machine, just like an SSH node, but also contains information pertaining to a Docker image and how to connect to the Docker REST API endpoint of the remote machine. Payara Server then uses these details when creating an instance to instruct the Docker engine of the remote machine to create a container and start a Payara Server instance within it. This instance will then be available for management from the DAS and should behave in the same way as any other instance, allowing you to deploy applications to it, have it join a deployment group, and manage its configuration & state.

How Do I Use Them?

This new command takes the same options as the create-node-config (namely nodehost, installdir, nodedir, and node-name), though if you’re using the base Docker image that we’ve created for this feature you only need to specify the nodehost and node-name options (shown in the example above). The new options are as follows:

You can also create the node from the admin console, simply choose a type of Docker from the dropdown and fill out the details: 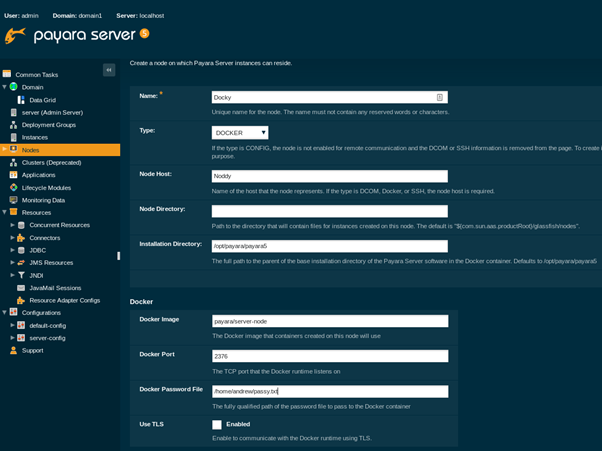 Once you’ve created your node, creating, starting, and stopping instances on it is done just as you would any other instance – nothing special or different is required:

Deploying applications is also done just as you would any other instance:

Now, configuring the Docker container of an instance itself. This is done by specifying system properties in the instance config, allowing configuration to be shared across multiple instances and overridden as required. Since Payara Server is communicating with the REST API of Docker, which uses JSON, some transformation has to be done so that you’re not literally writing out JSON on the command line. The solution settled on was to try and mirror the dotted name format of system properties already used within Payara Server.

In short, all options start with “Docker”, and each “level” of the JSON structure is denoted with a “.”. As an example of adding some configuring the memory and CPU shares of the container:

More examples and further information is available in the documentation.

If you have any further suggestions, please let us know; it costs nothing but time to raise an issue on GitHub or otherwise contact us!