TLS 1.3 compromised backward compatibility for proper security design. It was built from the ground up and removed a host of features that were responsible for vulnerability in TLS 1.2, such as Static RSA handshake, CBC MtE modes (this was responsible for Lucky 13 and POODLE etc.), RC4 and Renegotiation. They have also simplified some of the existing features and added new features to significantly improve performance, privacy and security.

Establishing a handshake in TLS 1.2 requires two round trips before starting to send HTTP call to interact with a server, first to choose the cipher suite it is going to use, and then to exchange the certificates and key share. Although in reality each trip only adds delays ranging in around hundreds of milliseconds to complete the handshake, research has shown that delay of even 250ms is enough negatively impact the user experience and make them think about trying a different website.

With TLS 1.3 most of the handshake can be established with just one round trip. This has a positive effect on the network resources that are required for a client to communicate with a server, roughly cutting the encryption latency in half. Making TSL 1.3 lot faster than TLS 1.2. 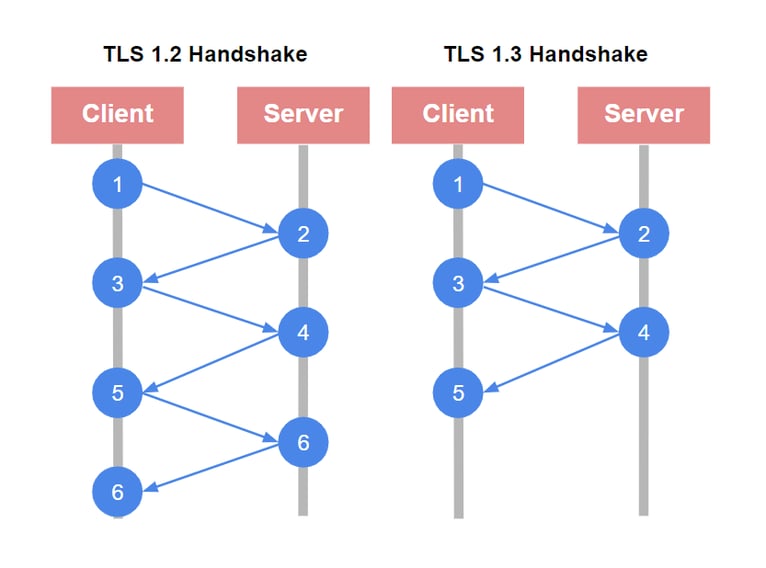 Another improvement in performance is that the resumption doesn't require a round trip. When a client and server successfully establish a TLS handshake for the first time, both of them store a shared encryption key locally. This key will be used in the future when the client visits the server again. The client can send encrypted data in its first message to the server, without performing the handshake. This is done using Session Ticket (PSK) with the encrypted key share which the server and client have agreed to previously, it uses this key to send the data back. This has the same latency as the HTTP because initial handshakes are no longer needed.

It also removed many of the vulnerable components such as Static RSA handshake, where if the certificate key was leaked, everything stored in the past could be decrypted, which is a huge problem because certificates are kept for years. Other components that were removed were vulnerable ciphers like CBC MtE modes and RC4. These ciphers were responsible for numerous attacks, such as Vaudenay, Lucky 13 and POODLE, but were only supported in TLS 1.2 for backward compatibility.

Nearly all the production Java applications are based on Java 8. But the TLS 1.3 was only included in JDK 11 and later versions, support for it was not backported to JDK 8. With Payara Platform, support for TLS 1.3 is available with Zulu JDK 8. Zulu JDK includes OpenJSSE TLS 1.3 JSSE provider, which can be used to enable TLS 1.3 support without any code changes. The OpenJSSE provider can also be used programmatically to code to TLS 1.3 and RSASSA-PSS capabilities not directly available via the Java 8 APIs. Read more on how to enable TLS 1.3 in JDK 8.

Since Payara Server 4 has entered the Maintenance Lifecycle, support for TSL 1.3 on JDK 8 is only available to Payara Platform Enterprise customers. Learn more on the benefits of becoming a Payara Enterprisecustomer.