*Update* - The IntelliJ IDEA Payara Tools Plugin has been released and offers a better alternative to the solution discussed in this blog. Read more here about the Plugin.

For those who are not yet familiar with a Payara Micro project, let us go over the important parts of the project file.

The initial packaging of the project is a WAR artifact. We can launch this as such by specifying this file when starting the Payara Micro instance.

Since Payara Micro is based on the Java EE Web profile (within the addition of a few other frameworks), most of the time you have enough to declare this in the Maven project file.

The preferred way of starting Payara Micro is using the following command:

You can also debug it remotely via the standard JDWP protocol on port 9009 using the following command:

IntelliJ IDEA has a specific run configuration for running JAR based applications. That one is ideal for configuring the IDEA when you develop an application running on Payara Micro. It allows running and debugging applications with Payara Micro seamlessly from within IDEA.

Before you configure it, make sure you have a Payara Micro version downloaded from our download page.

You will now have a screen where you can fill in all the details about your environment. 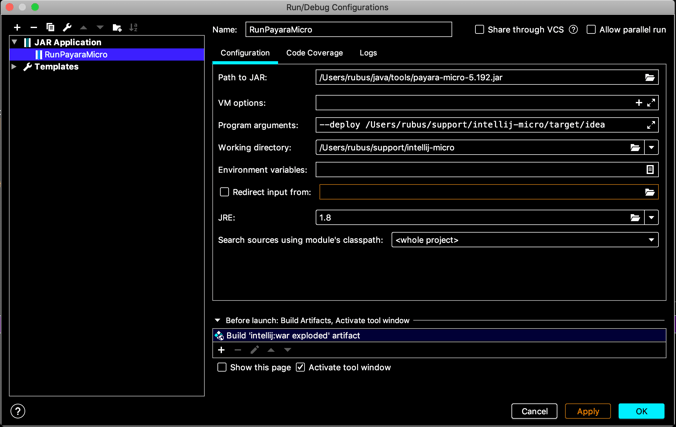 That's all that is required to have your Payara Micro application started or debugged when you click on the familiar run and debug buttons in IntelliJ IDEA.

Instead of restarting Payara Micro and the application each time when you change some code, you can also ask for a redeploy of the application. This will speed up the development - test cycle for the developer.

It is achieved by running the exploded war and a file with the name .reload at the top level inside it. Payara Micro checks for the timestamp of this file regularly, and if it was updated, it reloads the application.

This can be achieved by putting a few plugins into the Maven project file.

Whenever you want to perform a reload of the application, execute the following command:

The two plugin configurations work together to have the .reload file with an updated timestamp whenever we call the maven commands.

With the 'copy-rename' plugin, we can copy any source file to the Maven target folder. We link the copy phase of this plugin with the generate-sources Maven lifecycle phase so that the file is always available when packaging starts. This plugin is useful since it allows us to copy a file outside of the maven source directory so that we are sure that it is never packaged under normal conditions.

With the Maven ant plugin, we easily call the touch functionality of the ant system so that we are sure that the file has an updated timestamp. The timestamp is also updated in the case the file already exists because we didn't perform a clean earlier.

Do not forget to create and empty file in the src/payara directory as indicated in the plugin configuration.

Since IntelliJ IDEA has a configuration option for running a JAR application, which is what we need to run Payara Micro, you can easily integrate Payara Micro with the IDE in your development environment. You just need to indicate where Payara Micro is stored on your machine and where the application is built with Maven, for example.

With a few additional plugins, you can optimize the development - test cycle since only the application is reloaded, just as you can with Payara Server by redeploying the application.

Give it a try: