First, start Payara Server and open http://localhost:4848/ on your Web browser. The Admin Console main page will load as in Figure 1.

By default, the Admin console doesn’t require authentication and doesn’t allow remote access over network. If Admin console is secure with a password, it will first prompt for a user and password before loading the main page. You can do almost all of administration for Payara Server using Admin Console.

If you use Multi-Language distribution of Payara Server, Admin Console will be localized by the language settings of your OS. For example, you can see Admin Console when running in a Japanese environment in Figure 2.

The “Header” has various information about Admin Console. There is the “Asadmin Recorder” button that records user operations on Admin Console and write them as a script for asadmin command. See also Payara Server Documentation for details about Asadmin Recorder.

Each item of the “Left Pane” is aligned with the architecture of Payara Server. Thus, it’s important for you to understand this architecture before using Admin Console. In this article, I choose some important items and will explain their concepts.

I describe concepts of Payara Server in Figure 3. Each item of this chart represents an item which has the same name in the “Left Pane” in the Admin Console. 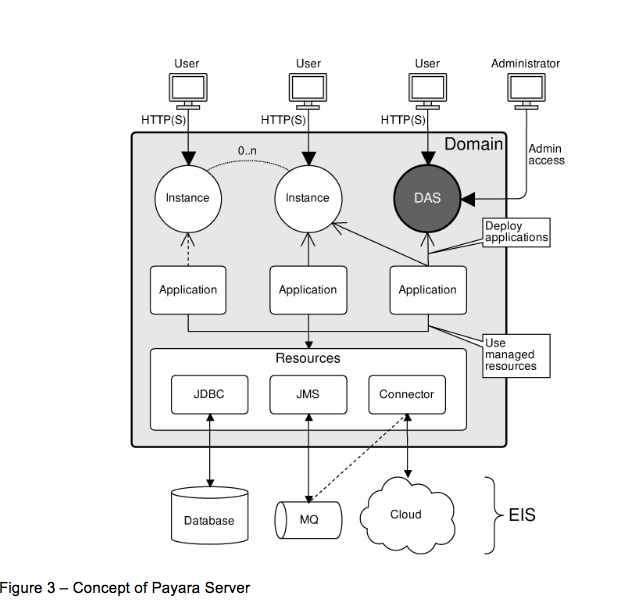 “Instance” is a JVM process as a part of Payara Server. It is actually a server that can run applications. There can be multiple instances running within a single domain, either listening on different ports on the same machine or running on multiple machines. An instance includes the following things:

Payara Server’s “Domain” has always at least one instance which is called “Admin Server (DAS)” and controls the whole Domain. In the Admin Console, you can find it in the “Left Pane” under “server (Admin Server)”.

“Application” means a server-side Java application, which is created using any supported APIs (e.g. Jakarta EE), packaged in a supported format (e.g. WAR, EAR) and may use shared resources provided by the server. (e.g. JDBC Resource for access to a database)

“Deploy” is an action that installs the application in Payara Server and sets it up so that it can be accessed of the server. Applications can be deployed to any number of instances, including the Admin Server.

“Resource” provides connectivity to external systems (EIS). Each application may use Resources as available in the server. Resources are shared by all applications and all instances. Resources can be accessed via a JNDI lookup or injected into applications. Payara Server provides the following resources:

“Concurrency Resources” do not provide a connector to an external system but to the internally managed executor services in Payara Server for using multi-thread process in applications.

“Monitoring” means reviewing runtime status of components and services of Payara Server. Admin Console provides direct access to the data from the monitoring service via a simple viewer. However, in many cases, external monitoring tools need to be able to access the monitoring data. One of the options is to connect via JMX to the Payara Server AMX extensions. JMX is a standard Java monitoring protocol defined by JSR 77 (J2EE Management API) feature. AMX are Payara Server extensions to the standard JMX beans provided by each JVM.

In AMX, there are probes managed as tree structure by Tree Node API in Payara Server. Each probe is give a dotted name which looks similar to an internet domain name. You don’t see the internal structure of monitored probes in Admin Console. But you could use any JMX client to see that the monitoring probes are managed as a tree structure internally.

“Configuration” is a data set which determines how Payara Server should operate. In particular, there are following items to configure:

Configuration settings are also managed in a tree structure internally, similarly to the monitoring data.

There are a lot of operations to administrate Payara Server. The most basic and typical operations are:

4. Review all of the above in a read-only manner

In the next article of this series, I will explain operations which you can perform in the Admin Console.