Now that Payara Server 5 is here, it’s a good time to brush up on the basics - with that in mind, I'm going to go through a few of the things you can do with the Payara Server CLI.

The Command Line Interface (CLI) is a means of controlling Payara Server from the command line (or terminal, if you prefer) allowing you to start, stop, or edit the server in a number of ways. Whilst to some the administration console is the go-to for any administration that needs to be done, the CLI can be a potentially quicker and easier way of performing any administration tasks, particularly when dealing with headless servers (a server without a GUI).

The Payara Server CLI is used with the asadmin utility (as in "Application Server Administration", it isn’t just gibberish). This can be found in the bin directory of your Payara Server install. All Payara Server administration commands are sub-commands of this utility, and as such, each command must be prepended with this function (e.g. ./asadmin do-a-little-dance).

A handy tip to avoid prepending asadmin to each command is to call the asadmin function on its own (e.g. ./asadmin). This will run asadmin in an interactive mode, saving you a few keystrokes if you intend to execute several commands in sequence.

You can specify additional options for most commands in the CLI, some of which are mandatory for certain commands to execute. The list of options that a command takes, as well as a description of the command and examples, can be found by passing the --help parameter to the command (e.g.  ./asadmin start-domain --help). Each of these options must be prepended with "--", though some options have a shortened version for which a single dash is sufficient. For example:

The start-domain command starts domain1 by default. To start an alternative domain you must specify the domain as an additional parameter like this:

As previously noted, you can use --help to list the available parameters that each command can take. Doing so for the start-domain command reveals the following parameters: dry-run, domaindir, upgrade, debug, verbose, and watchdog. Of particular note are the debug and verbose options, which are very useful for debugging.

Stopping a domain is as easy as starting it, the command is just stop-domain.

As with when starting domains, domain1 is stopped by default. To stop an alternative domain you must specify the domain to stop:

Debugging is available for these commands with the --debug­ option, which starts the instance with debugging enabled. An additional debugging option is available to the start-local-instance command: --verbose. This allows you to have both start-up and log messages printed to the console when starting the instance, helping you to quickly see what is happening.

Another notable and useful option is --sync. This option takes one of three parameters: none, normal, and full. If using this option, you must specify one of the parameters; it is mandatory. The sync option specifies how the instance synchronises itself with the DAS (Domain Administration Server): 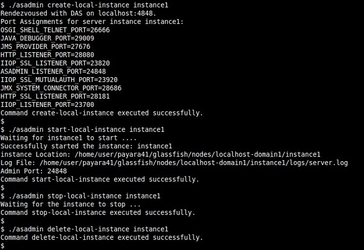 The new feature in Payara Server 5 that looks to replace the clustering of old, they’re similar, but also a bit different. With any new feature though, we’ve got some new asadmin commands (yay!).

Like with clustering before it, there’s no differentiation between a remote and local start/stop command for deployment groups, so you only need to know of the following commands:

Now things can get a little complicated. If you just want to create a new domain with default values, run this:

It will ask for you to specify a name for the domain, and an administrator username and password. It will then list the ports that it will use the default ports, and generate a self-signed certificate.

If you want to customise the domain a little, then there are a wealth of options available for this. Below are some notable ones: 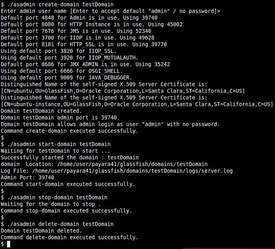 If the default values for when creating a config node are not suitable, you can have their node host, install directory, and node directory specified with the nodehost, installdir, and nodedir options respectively.

These options refer to the machine that will host the node, the installation directory of Payara Server on that machine, and the directory under which the nodes are stored (this particular option can probably be omitted for most configurations). The default install directory is taken as the install location of the DAS; the default settings assume that Payara Server is installed in the same location on all hosts.

Due to the relative complexity of an SSH or DCOM node in comparison to that of a Config node, they respectively have more options that can be used to create and configure them. The full list of options can be seen by passing the help option (./asadmin create-node-ssh --help), but I'll cover a few for both here.

Creating a deployment group is very simple: run the create-deployment-group command and give it a name. That’s it!

By default, an instance will create its own config, copied from the default-config. You can change to use a pre-created one with the --config option:

You can specify the listen ports that the instance will use with the
--systemproperties option.

To specify the node that an instance will belong to, use the --node option, like this: 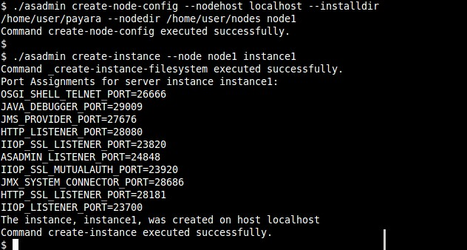 You can use the CLI to manage the admin and master passwords of Payara Server. The two passwords are managed with the following commands:

The change-admin-password command is specific to a domain, so has the following two options to allow you to specify the domain to use: domain_name, and domaindir. If multiple admin users exist, you can specify which user to change the password of like this:

To deploy an application to the default instance (the server where the admin console is installed), simply enter the following:

Once you have your Payara Server environment set up, you're not likely to be deploying to the default server instance, so the target option will likely be of use to you, as it specifies where your deployment will be deployed to. With this option, you can specify that the component be deployed to an instance or a deployment group.

The CLI also has a deployment option not available from the admin console – deploy-remote-archive. This command can be used to deploy an application not just from a URL, but also from a Maven repository using Group, Artifact, Version (GAV) coordinates.

There is no special flag to differentiate between a URL and Maven GAV coordinates – the command should figure it out on its own, making the following identical:

If you’ve a sharp mind, you’ll see an option I haven’t discussed yet: --additionalRepositories. This option is used to provide a comma separated list of maven repositories to search for the specified application in; by default the command will only look in Maven Central.

The main feature that differentiates deployment groups from the clustering of old is that the instances in a deployment group are more flexible – an instance is no longer tied to a cluster for its life, and can belong to more than one deployment group.

To accommodate this new flexibility, there are two new asadmin commands for adding and removing instances from a deployment group:

Another place where things can get complicated, Hazelcast has been present in Payara Server and Micro for quite a while, but with Payara 5 it’s even more heavily integrated – it would be remiss of me not to at least mention how to configure it!

The domain data grid is achieved using Hazelcast, so the configuration commands are named after that relationship:

The set command has a multitude of options, so I’ll only go over the most commonly used ones here:

New in Payara 5 is an option to change how Payara instances cluster with each other, configured with the --clustermode option. Note that this is another option that is domain wide – you can’t figure one config to use cluster mode, and another to use a different one.

This is the default option used by Payara Server, and by being the default, will hopefully not require any extra configuration out of the box.

In fact, all you need to do is set the discovery mode to domain, and that’s it! There’s no extra configuration required with regards to telling each instance where to find the DAS – it’s figured out from the address the DAS used to bind Hazelcast to.

This cluster mode is aimed more at being used with Payara Micro in cloud environments, so I’m not going to go into detail about it in this blog.

In short though, it’s for use in environments where there a) may not be a DAS, and b) multicast can be problematic (or just impossible!). Functionally it’s a bit like a reverse of the domain discovery mode: with the domain discovery mode, you tell each instance where to find the DAS, with TCP/IP mode, you tell the DAS where to find the other instances.

This is how Hazelcast did it’s clustering back in Payara Server and Micro 4, and remains the default for Payara Micro.

There haven’t been any changes to this mode (outside of having to specify to use it with Payara Server) – you just have to tell it the multicast group and port number with the respective options:

That's it for this introduction to the Payara Server CLI. You will have taken your first steps to navigating the technical wilderness that is the CLI, though the path stretches on for quite a way yet (for almost as long as I'm stretching this metaphor). Hopefully you can also see that the CLI can be a viable alternative to using the admin console to administer your Payara Server, rather than some needlessly complex thing used by people to show off!

Give it a try: