Virtual servers are a common concept to developers familiar with configuring web servers like Apache HTTP or Nginx. A virtual server represents a placeholder for a physical Payara Server instance to be "visualized" as multiple instances at once, allowing to server requests for multiple domain names. Detailed information on virtual servers can be found in the official documentation for Payara Server.

Virtual servers are part of the HTTP Service in Payara Server, but they are configured with sensible defaults so hosting web applications can be done with little to no custom configuration. This blog will show you why you might want to use virtual servers more consciously, and how you would do so.

When making a web application, it's usually good practice to separate out the front-end and back-end. To do this, you might in some cases just leave your website at the context root (e.g. "http://mycoolwebsite.com") and host the API in a subdirectory (e.g. "http://mycoolwebsite.com/api"). However, in some cases it can be useful to separate these two components out into different subdomains. This would mean that for the previous example you could keep your website at http://mycoolwebsite.com, but instead move your API to http://api.mycoolwebsite.com. This is one of the scenarios that can be achieved using virtual servers in Payara Server, and is the scenario that the remainder of this blog will describe. A basic knowledge of JSF as well as JAX-RS will be assumed.

We are using two applications below, both of which can be found in the Payara-Examples suite (here and here). Alternatively, you can make your own applications and use the example projects as inspiration!

We are going to use the hello-world-rest application from the Payara Examples suite. This is a simple application that tests a basic endpoint, and uses JAX-RS filters to print to the log the name of the endpoint that was hit. It hosts an endpoint at "/hello" which returns "Hello World!" as a string.

For the front-end we can use the rest-request-jsf application from the Payara Examples suite. Because we have separated out the front-end and back-end so much, you could instead replace the front-end library with any other front-end library or language (e.g. Angular or React). JSF is referred to as a component-based MVC framework as opposed to a request based framework like the afforementioned two Javascript frameworks. In context this means that the intended JSF application design is not to make REST requests, but to delegate logic to a backing bean and @Inject everything you need in there. In this application we're ignoring that to prove a point. It's generally inadvisable to write code in production just to prove a point (for some reason it seems to wind people up!), but for the purposes of this example it shows off virtual servers quite well!

This application hosts a JSF page, which will print the output of the "/hello" endpoint from the API. The index.xhtml page is shown below, followed by it's backing bean and API communication class.

Once you've downloaded and built both of the above applications you're ready to deploy both. Start Payara Server, and go to the admin console at http://localhost:4848. Go to Configurations → server-config → Virtual Servers. 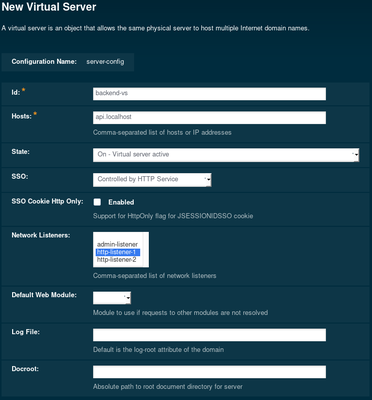 Next, make sure that default virtual server for the chosen listener is changed. Otherwise there's a chance you might get redirected to the default Payara page instead of the deployed application. This is because the listener doesn't see an application name in the URL, so might redirect you to the 'server' virtual server (which hosts the default Payara page). You can configure this option under Configurations → server-config → Network Config → Network listeners → your-listener → HTTP → Default Virtual Server. 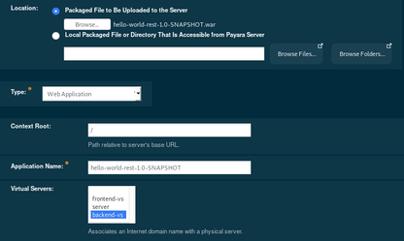 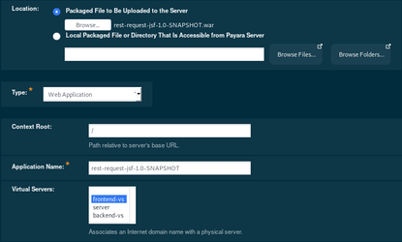 Once you've done this, the page will be available from http://localhost:8080/. You can also visit http://api.localhost:8080/hello/, which will give you the same result but from the REST endpoint!

This blog has shown you how you can use virtual servers in Payara to serve requests from different subdomains. Virtual servers are also capable of doing a lot more like serving completely different domains, as well as configuring error pages and redirects for multiple deployed applications. To get more details on the workings of virtual servers, see the official documentation at: https://docs.payara.fish/documentation/payara-server/server-configuration/http/virtual-servers.html.