*Note: This blog post is an update to Load Balancing Across Payara Server Instances with Apache Web Server, which was written for Payara Server 4.

Continuing our introductory blog series (Payara Server 5 Basics), this blog will demonstrate how to add load balancing capability to Apache Web Server and forward to our simple Payara Server cluster.

A load balancer can redirect requests to multiple instances, primarily for the purpose of distributing incoming requests between cluster members based on pre-determined rules. This could be a simple "round-robin" algorithm, where the workload is distributed to each instance in turn, or a weighted algorithm where requests are delivered based on a pre-determined weight for each cluster member. A load balancer plays a key role in our cluster: 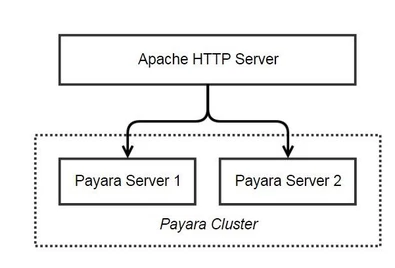 So far in this series we have:

To follow along with this blog, the cluster we created in Part 3 and our Apache configuration from Part 2 will be required.

As it currently stands, this environment is:

Since this blog is demonstrating Apache's load balancing capabilities, we will need the clusterjsp sample application, which we will deploy to our cluster.

Clusterjsp is a simple web application which can show HTTP session information alongside details of the server instance which served the request. This should make it clear if Apache is load balancing our requests between our two server instances.

Now we have the endpoints we need to add to our load balancer! We have the choice of HTTP or HTTPS direct links to the Payara Server instances. Since we are going to use Apache, we can terminate SSL when requests reach the load balancer rather than continuing to pay the performance cost to HTTPS at this stage. It should be noted that the performance cost is not such an issue with HTTP/2. Payara 5 supports HTTP/2, however HTTP/2 still has a few issues that need working out.

Setting up Apache Web Server as a Load Balancer

If you have been following this series of blogs you should already have Apache Web Server installed with a basic mod_proxy_http, and your a site configuration called "payaraSite" at /etc/apache2/sites-available/payaraSite.conf, which should look like this:

While this worked when we were using the ProxyPass directives to forward to the Domain Admin Server (DAS - A Payara Server instance that manages the other instances), we now have two cluster members as separate instances at http://computer1:28080/ and http://computer2:28080/  - so we no longer want to send traffic to the DAS.

The modified configuration is similar to what we had previously done by forwarding traffic to a specific URL, except the URL will now point to a block of possible endpoints within a <Proxy> tag, and a load balancer method to determine how the proxy is chosen.

The by_requests method of load balancing simply alternates between instances in a round-robin.

Once we have a list of endpoints, we can change the ProxyPass directives to use one of the endpoints we just specified, by referencing the <Proxy> block. We could create multiple <Proxy> blocks with different names to refer to different lists of endpoints, depending on which applications we wanted to load balance and what endpoints they were deployed to.

In our case, the configuration file should now look something like this: 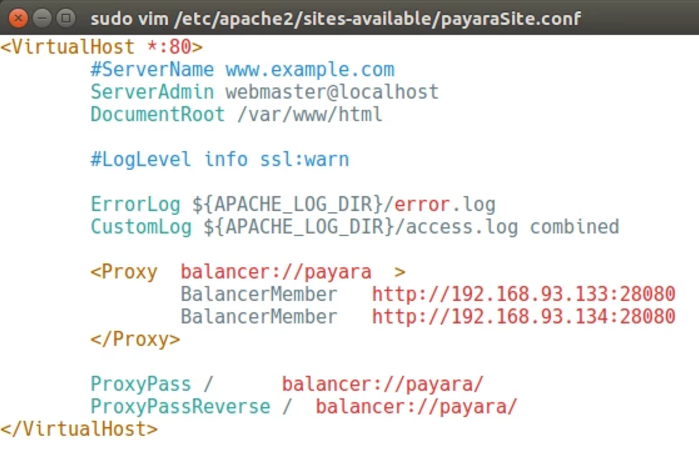 On the host where Apache is installed, whenever we load the page http://localhost/clusterjsp we find that each request alternates between being served from the first or second Payara Server instances:

So with that done, we have implemented basic load balancing to spread requests across multiple Payara Server instances, thanks to Apache Web Server and its mod_proxy_http and mod_proxy_balancer modules. This configuration is relatively naive and won't take into account session data, so in our next blog, we will enable sticky sessions to make sure that users' sessions will be pinned to a single Payara Server instance, rather than bouncing between the two.

Want to get more out of Payara Server in Production?