You probably already know what clustering is, but you might not know that Payara Server 5 automatically clusters. If you use Payara Server 4, you have to manually set up clustering. Payara Server 5 introduces a convenient feature called Deployment Groups. Deployment groups do exactly as the name suggests: it allows you to group a collection of instances that will be the targets of your deployment.

On computer1, start up Payara Server (note the install location may be different to your set up): 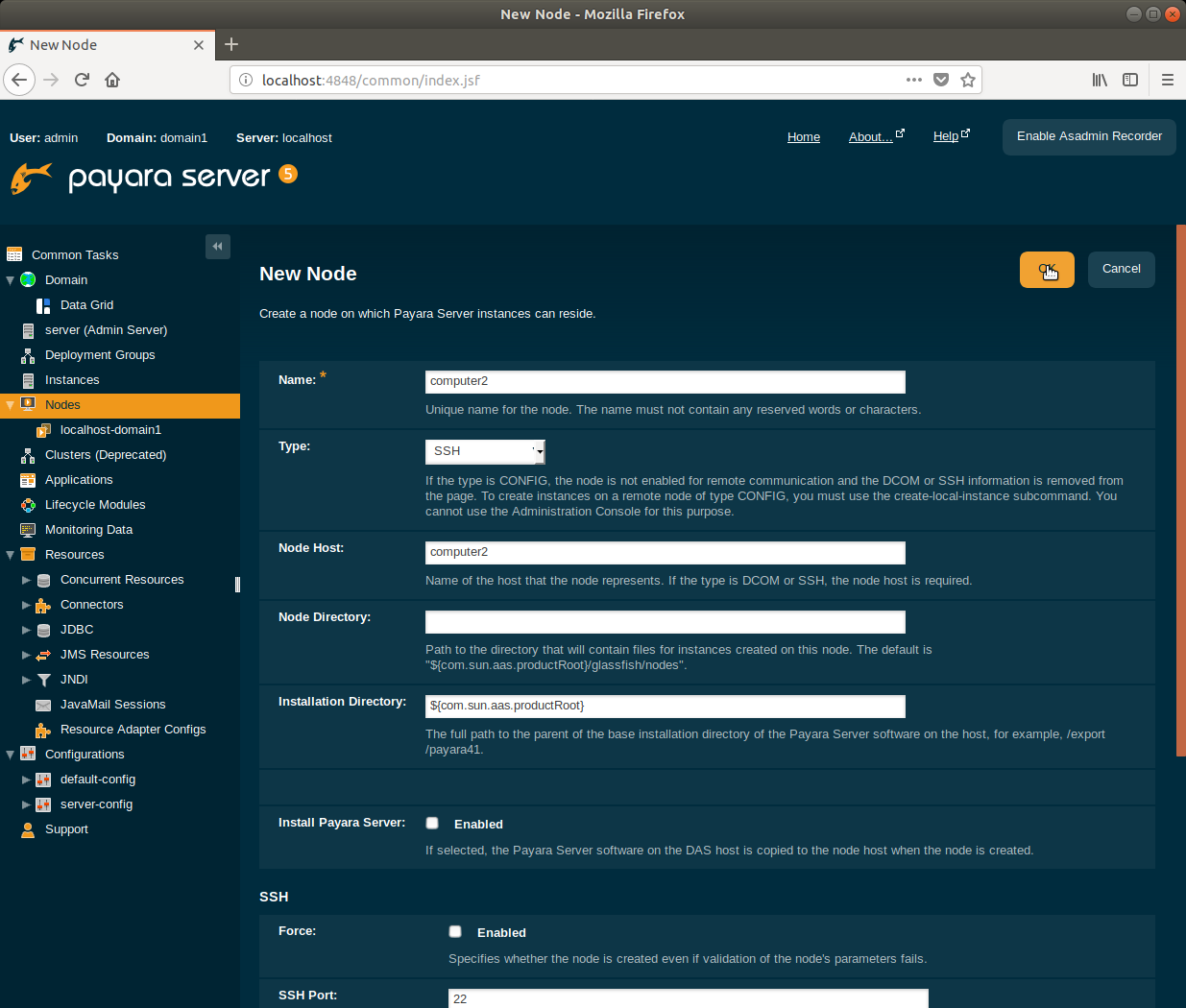 You will now see 2 nodes. The 'second-instance' node we just created, and the node you're working from: localhost-domain1

Now to put these into a Deployment Group: 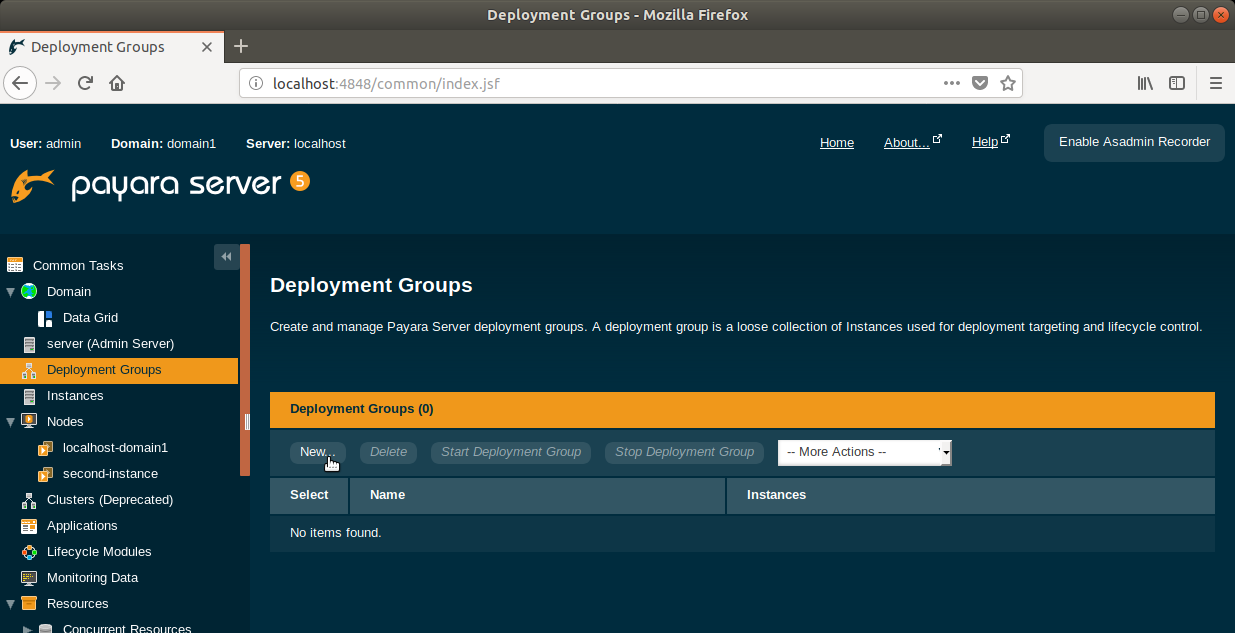 At the same time we will create the instances: 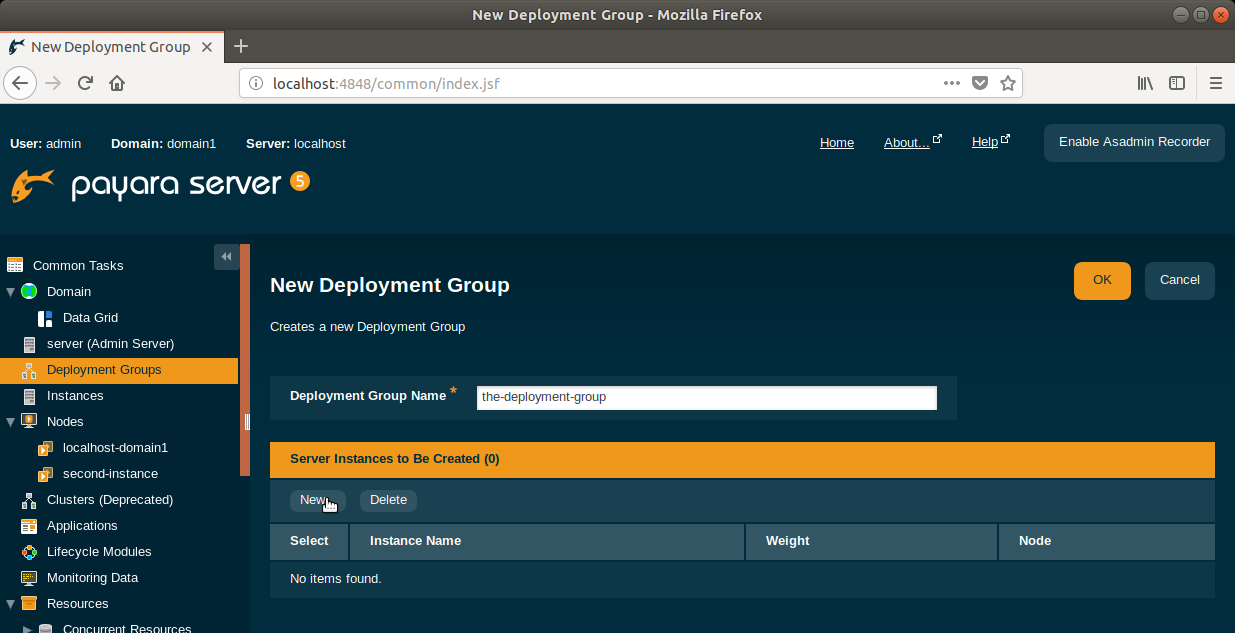 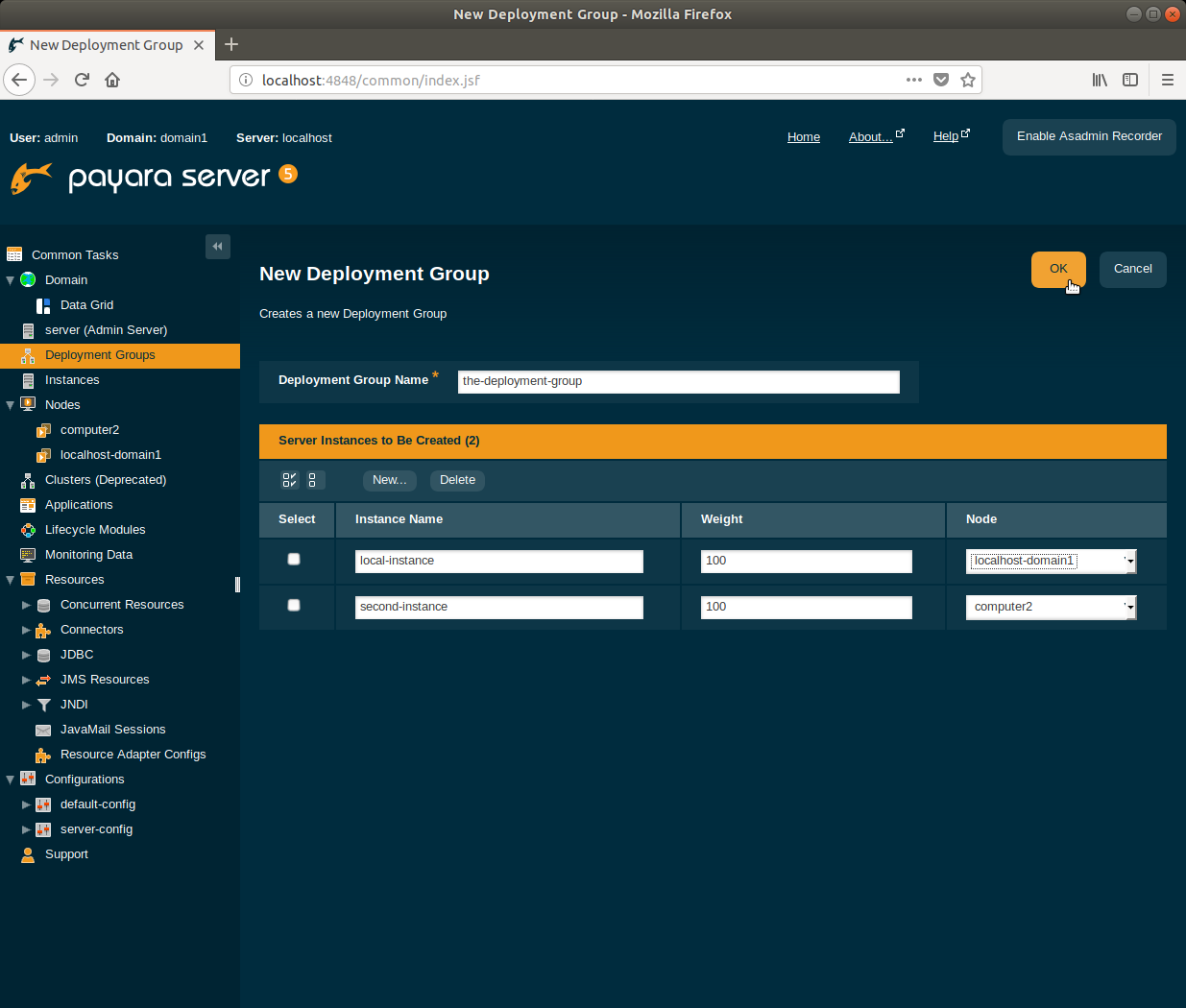 Your deployment group has now been created. Next we will build an example app and deploy it.

Getting and Building the Example

This section explains how to build our example jcache cluster example. If you haven't already got a copy, obtain the rest-jcache example app from our Payara Examples repository.

In this folder there is now a target folder where the rest-jcache-1.0-SNAPSHOT.war has been created. Take note where this is in your file system. We'll need it to deploy in the next section

Before deploying we need to start all the instances within the deployment group with 2 clicks. 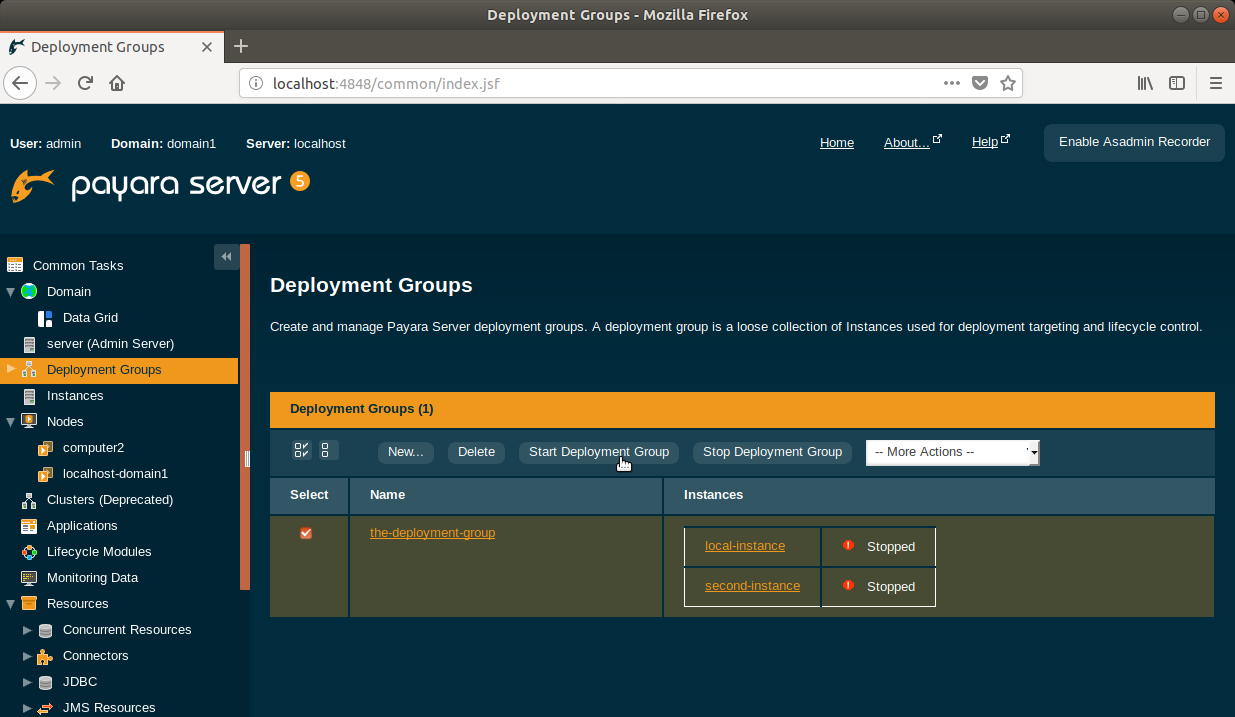 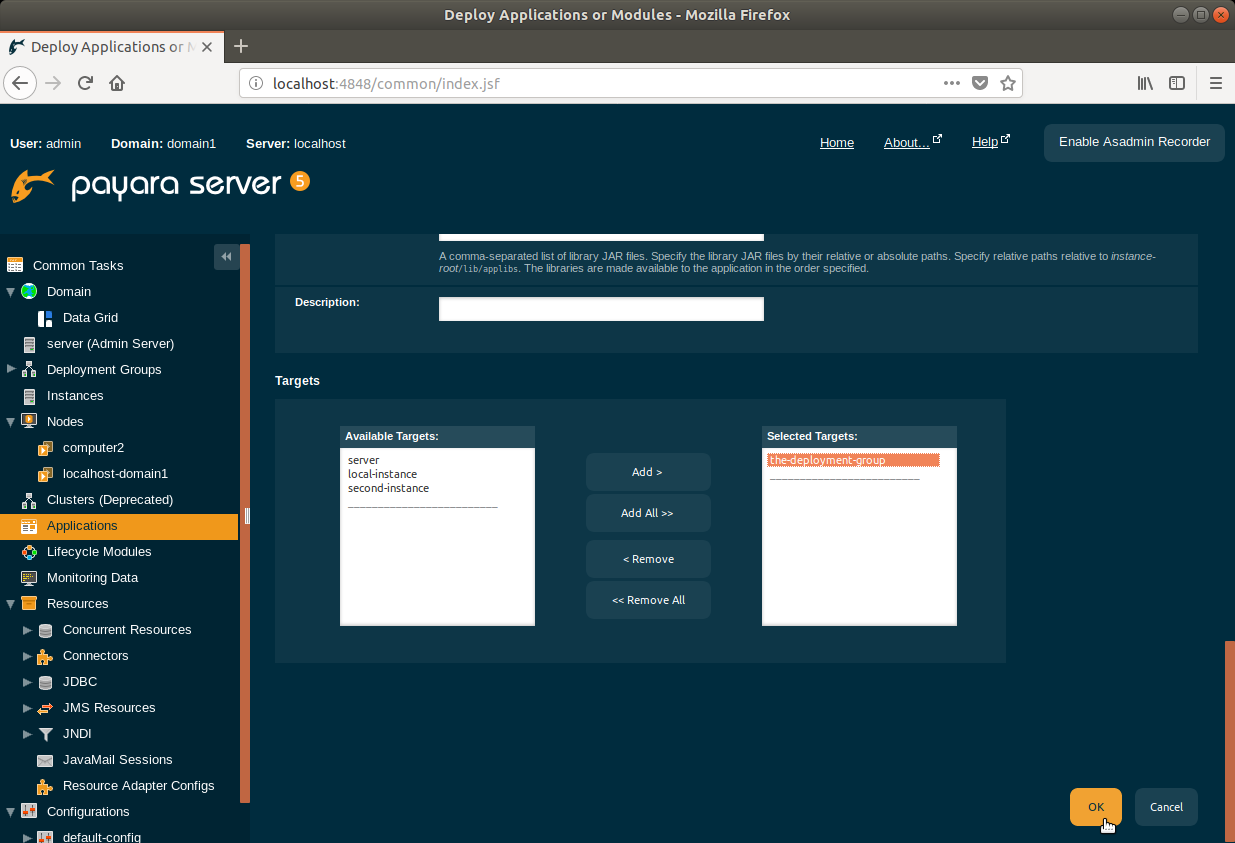 The application will now be deployed to Payara Server running on both computer1 and computer2. You could have more computers in your deployment group if you wish.

To demonstrate that the clustering is working we can use the JCache demo app to set and read a variable from each instance. We'll do this with curl (If you don't have it - sudo apt install curl).

First check the value for the default with curl "http://<hostname>:<port>/<application context root>/webresources/cache?key=payara"

And lastly check that value was transferred over to both instances from a single PUT on 1 instance with the first command again.

What we've done is installed Payara Server remotely whilst setting up a new node. The cluster would have been set up automatically. We then added the remote instance whilst creating a deployment group. Next we built a sample application and deployed it to the deployment group. It was then possible to demonstrate the cluster in action by setting a variable on machine1 and reading it from machine2.

Clustering can be done on more than 2 machines, and can be done across any of the supported operating systems.

If you're looking to implement clustering for a performance, or high availability system,